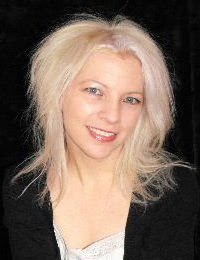 The awesome Stacia Kane has a hot dystopian urban fantasy series out right now–the Downside books–that addresses some real world issues, which makes it even better for me.

The MC, Chess Putnam, is a Debunker for the Church of Real Truth. She is also a fully tattooed witch and ghost hunter, and she gets into some really spooky situations.

The first book in the Downside series, UNHOLY GHOSTS, debuted on May 25, 2010. Here’s the description from Stacia’s website:

The world is not the way it was. The dead have risen and constantly attack the living. The powerful Church of Real Truth, in charge since the government fell, has sworn to reimburse citizens being harassed by the deceased. Consequently, there are many false claims of hauntings from those hoping to profit. Enter Chess Putnam, a fully-tattooed witch and freewheeling Debunker and ghost hunter. She’s got a real talent for nailing the human liars or banishing the wicked dead. But she’s keeping a dark secret from the Church: a little drug problem that’s landed her in hot and dangerous water.

Chess owes a murderous drug lord named Bump a lot of money. And Bump wants immediate payback. All Chess has to do is dispatch a very nasty species of undead from an old airport. But the job involves black magic, human sacrifice, a nefarious demonic creature, and crossing swords with enough wicked energy to wipe out a city of souls. Toss in lust with a rival gang leader and a dangerous attraction to Bump’s ruthless enforcer, and Chess begins to wonder if the rush is really worth it. Hell, yeah.

And the third book in the Downside series, CITY OF GHOSTS, will debut on July 27, 2010.

Stacia was nice enough to grant me an interview to share with you guys. I hope you like it and will pick up these books. You won’t be disappointed!

Stacia Kane–Well, the obvious answer is that she’s an addict, but I think that’s actually kind of peripheral, in a way. Chess is different because her magical ability–she’s a witch–requires tools and rituals and memorization; it’s not like a muscle she can flex; of course, not all UF heroines are like that, but a lot of the ones I’ve seen are. I think she’s different because of the depth of her self-destructiveness and self-loathing; she’s someone who is constantly ashamed of herself, who constantly wants to escape herself. But at the same time there’s hope in her, and loyalty, and friendship and even love. I think she’s tough and kick-ass without being stereoptypically “kick-ass;” she can take care of herself, certainly, but she doesn’t relish the prospect of violence and the way she makes her living isn’t violent, although the potential is there.

That’s a difficult question to answer, I think, because it sounds like I’m dumping every other UF heroine into a pot and declaring them all alike except mine, and that’s not the case at all. There are as many different kinds of UF heroines as there are UF novels. But I do think Chess’s self-destructiveness and shame combined with her sense of hope and loyalty make her unique, or at least, make her like a real person.

2.) DH–Chess is a drug user. What made you explore that angle within your character?

SK–I don’t really remember how the idea came to me. I really wanted to write a UF heroine with real problems, someone who wasn’t just an outcast but who deliberately hid. I wanted someone who was tough but who had this one major vulnerability, and I wanted that vulnerability to be something plots could spin from and which would contribute to the world and the stories; you know, if your story isn’t unique to your character and your world, if it could happen with other people in other places in exactly the same way as it happens in your book, maybe you shouldn’t be writing that story.

But I really liked the idea of that weakness and of the ways it could be used in a story. I loved the dichotomy in her employment with a Church that emphasizes Truth, and her job with that Church being to catch those who lie, while she herself lies constantly and hides the deepest part of herself from everyone.
And I liked the way it gave structure to her life and the books. But to me the drugs are an adjunct to Chess’s character; the drugs are how she dulls her pain, but her pain is what makes her Chess and what makes her someone I want to and can write about.
3.) DH–Why do you write Urban Fantasy? What influenced you to write it?
SK–I just love it! I’ve always been a big fan of anything paranormal, and I was writing paranormal romance when I suddenly kind of realized, wait, I don’t have to write romance! I can write whatever I want. Not that I don’t love romance and didn’t love writing it, but it was so freeing. And then I realized that most of the books I really love are now considered UF, so it just seemed natural to me. I love that while there are genre conventions, there aren’t so many and they aren’t as strict. I love seeing how far I can take the characters and the world.
4.) DH–Do you plan to write in other genres in the future?
SK–I don’t know, really! I’d like to try writing something maybe a little less fantasy and a little more straight commercial or women’s fiction someday (with fantasy elements still, but not genre fantasy work), but I don’t know that I ever really will. I love writing fantasy too much to want to permanently leave it, honestly.
5.) DH–Who are some of your writing influences?
SK–Oh, gosh, I have so many! Neil Gaiman. Andrew Vachss. Vera Caspary, Cornell Woolrich; really all of the old noir writers. Barbara Michaels. Richard Matheson. Alan Moore. Stephen King. Early Elizabeth George. I think everything we read influences us in some way, so it’s impossible to list all of them, but those are the main ones, I think. Those are the voices and atmospheres I try to keep in mind when I work, even if it doesn’t come through at all.
I’d like to thank Stacia for her time and for letting us get to know a few things about her. You can find her at her website here or at the links above. 😀