I have loved zombies since I was in middle school! Teehee. Which was around the time I fell in love with horror in general.

There was something about being chased by these nasty, gory looking creatures who wanted to eat or otherwise kill you. And they always outnumbered the living. Scary indeed. Folks were put into survival mode and had to find weapons, and even fend off other survivors who wanted to exploit the situation. Crazy.

It seems like everyone is zombie crazy nowadays, which is funny to me because I have been since I was a kid. So myself and other zombie lovers are like, “A-ha, general public! Now you’ve figured out the awesomeness that is zombie!” Lol. 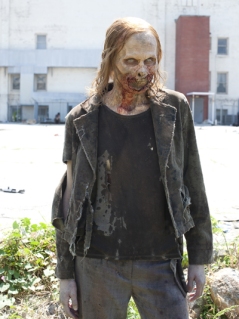 The Walking Dead is insanely popular right now. People I know who don’t normally like horror love this show!
Scores of zombie movies have been, are, and will be made. You can find them almost everywhere now. Zombies may be a fad for some right now, but they’ve always been beloved by me.
The better the make-up, the more fright and shrieks a zombie will cause. 🙂 Look at this zombie woman on the right. Uh, what happened to her mouth? Eww. Lol.

﻿I didn’t list any zombie movies because I was saving that for zombie books! Well, and because of laziness. Lol.
Some of these books will eventually become movies as well. Most I have read, but maybe I’ll list a few I haven’t either, just because they’ve been recommended to me:
CELL by Stephen King
DEVIL’s WAKE by Steven Barnes and Tananarive Due (husband and wife team)
WORLD WAR Z by Max Brooks
THE FOREST OF HANDS AND TEETH by Carrie Ryan
ROT AND RUIN by Jonathan Maberry
THE RISING by Brian Keene
ASHES by Ilsa J. Bick
THE LIVING DEAD (compilation of short stories from some of horror’s best) Edited by John Joseph Adams
FEED by Mira Grant
MY LIFE AS A WHITE TRASH ZOMBIE by Diana Rowland (this has humor, so not typical zombie stuff)
That’s only a taste of zombie novels. There are websites that offer lists of them, but they are based on what reviewers deem as zombie-themed works, so they are not always accurate, so I won’t link any of them.
Even when zombies are forgotten for the next big thing, I’ll still be around admiring them and watching and reading their stories. 😉