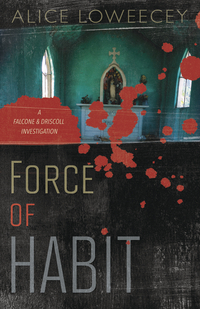 FORCE OF HABIT is the debut novel by my friend Alice Loweecey.

Below is a blurb of the novel per Alice’s website:

After ten years in the convent, Giulia Falcone now works as an investigator for the foul-mouthed former police detective Frank Driscoll, for whom she harbors some romantic feelings. The duo are hired to find the person who is stalking and threatening a local wealthy businessman and his fiancée, but Giulia soon attracts the stalker’s attention. This debut mystery by a former nun contrasts a humorous narration with the realities of Giulia’s adjustment to her new life outside the convent walls and her low self-esteem.

Alice took time out of her busy schedule for an interview with me:

1.) Did you loosely base your MC on your own life as a former nun?

Very, very loosely. The similarities are: She was a Franciscan nun, and so was I. Giulia is much more uptight and repressed than I ever was. However, some nun traits are universal and enduring. For instance, about fifteen years after I left the convent, a priest told me I still “stood” like a nun.

2.) What genres do you prefer to write in? (I’ve read some of your horror, which was excellent, btw)

Thank you! I’m a horror writer in my heart of hearts. I didn’t know that I had a knack for mysteries until I started to write one. I’m also a huge post-nuke dystopian fan—I’ve read just about everything in that sub-genre. My next project (besides more Falcone & Driscoll books) is a Young Adult dystopian.

3.) Is this book the first in a series or is it a standalone? Do you have other series planned or just stand alone novels?

I have a contract for three books in this series, with potential for more. Giulia, Frank, and Sidney (their perky admin) are easy and fun to write. I can imagine several more books about them. Then there’s the paranormal and the horror and the dark fantasy and… My “to Write” file keeps growing!

4.) Do you have any writing rituals or habits?

I’m a confirmed outliner. I wrote my first book as a pantser and it took forever. When I decided to try mysteries, I knew I’d be lost without an outline to plant clues and remember suspects. Now I won’t start a book without one. I’m also an anal-retentive researcher. I can get lost for hours looking up details and scenes and floor plans and all the things that help me to visualize a scene.

5.) What is your best piece of advice for aspiring or unpublished writers? ( I ask this question quite often)

Never give up! Never surrender! (With thanks to the movie Galaxy Quest.) I had some brain-melting setbacks in my drive to see my name on a shelf in a brick-and-mortar bookstore. There’s a file folder on my desktop with approximately 185 rejections in it for three different books. It was a long, hard road—but if it was easy, then seeing my book on those shelves wouldn’t be as sweet.

Also, find some fellow writers, online or in meatspace. No one understands writers like other writers. I’m part of the Absolute Write Water Cooler, and they’re some of the best people I’ve never met (in person). This business is like the roller coaster from Hell sometimes, and fellow screaming coaster passengers make it easier.

I’d like to thank Alice for taking time for the interview. You can find out more about Alice and her work here. FORCE OF HABIT is now available in stores and online.

Giveaway: For a chance to win a signed copy of FORCE OF HABIT by Alice Loweecey, all you have to do to enter is leave a comment. Also, please list your e-mail address as follows: your e-mail (AT) wherever (DOT) com, so you won’t get junk mail. The contest is open to everyone in the U.S. only please. The contest will end on February 24, 2011 at 11:59 p.m. EST. Good luck. A winner will be chosen at random and announced on February 25, 2011.