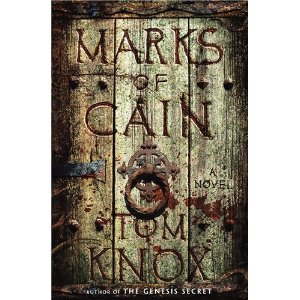 The Marks of Cain is a thriller by Tom Knox, a pseudonym for journalist Sean Thomas.

According to the publisher, Viking, The Marks of Cain is a parallel mystery that takes two men from the jagged cliffs of north Atlantic islands to the heart of the Arizona desert, from the cursed graveyards of the Basque countryside to a horrendous and earth-shattering secret that lies in wait in the heart of old Colonial Africa.

My review: The story centers around a young lawyer, David Martinez, who receives an ancient map from his dying grandfather. At the behest of his grandfather, David travels to the Basque mountains and runs into danger immediately.

The novel is told from the points of view of both men and is based around a mystical race of Cagots, who are thought to be humans but not from Adam and Eve.

The Marks of Cain is a fast-paced thriller that centers on Nazi eugenics, which will offend a great deal of people. It also ties in a religious slant that will again offend some people.

For me, it didn’t have shock value, even though I think that was the intent. It has been touted as the next DaVinci Code. It was a fast read, but it didn’t “wow” me. It was only okay for me. Based on a five star rating, I’d give The Marks of Cain a 2 out of 5 stars.

To find out more about Tom Knox and his books, go here: http://www.tomknoxbooks.com/

Disclaimer: As per FTC guidelines, I received a review copy of The Marks of Cain from Viking. I did not receive any endorsements of any kind, whether that be monetary, gifts, etc.